Putting myself out there 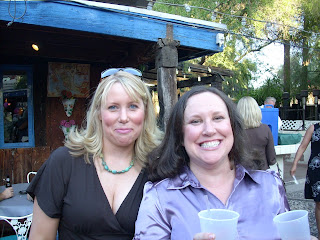 Honestly, I don't think KC had that great a time--she didn't seem to, anyway--but maybe it is just harder for her to "get back out there" than it is for me. (She is still in love with her most recent ex-boyfriend.) I had fun. The crowd was a little older than I'd hoped, but in a way it was nice to be one of the younger (and, if I may immodestly say so, more attractive) women there. LOL Two different guys spent quite a bit of time talking to him; I'm sure they were both interested in me (it was pretty obvious). The first one didn't appeal to me as a romantic prospect; the second one kind-of did and was pretty attractive. And I saw a third man I found attractive; we exchanged a few glances and smiles but never actually talked.

I met several women, too, who were fun to chat with. All in all, I like the group and am sure I will attend other group activities. That's one of the reasons I didn't pursue anything with the second guy I talked with: I figure I will likely see him again. (Ditto for #3.)

I posted some new photos on my match.com profile. Response to my profile has increased significantly since they were approved, and two men with whom I've already been chatting also emailed raving about the new shots. :) So I guess KK and V were right.

J also browsed my profile on Thursday night. (To, as he said, give his "unsolicited opinion.") He said the old photos I had "didn't do [me] justice" and suggested new ones. So I guess he was right, too.

I have a handful of prospects from match at the moment. "M" is a 42-year-old, never married guy, who lists his job as "real estate investor." We had a 20-minute chat on the phone Thursday night; he was articulate and sounds interesting. I have a few questions in my mind about him, but no per se red flags.

"D" is my age, twice divorced, has a 7-year-old son, and works in IT. We "chatted" on Yahoo messenger Friday night for about 90 minutes. Despite his baggage (2 ex-wives & a kid), I actually think I'm a bit more interested in him than in M. We share quite a few similar interests, and he has the kind of quirky sense of humor I like. . . plus he seems really sweet.

BUT it's early days yet: I haven't even meet either of these men face-to-face yet. Who knows how I'll feel once we meet?

I think I am going to meet D for a drink one night this week after work; we "talked" about it last night and exchanged phone numbers. M has not suggested a face-to-face meeting yet, but I believe it is merely a matter of time until he does; we had a good conversation, and he has emailed me at least three more times since we talked. So clearly he's interested.

In addition to M and D, I have exchanged emails with a few other guys who seem to have potential. But we'll see. I've also fielded several emails from guys who could never be contenders, for various reasons, but that is par for the course with this online dating thing.

My mom is back as of yesterday afternoon. We walked the dog this morning, then went to brunch. Otherwise, we've been mostly hanging around the office. I wanted to spend this weekend spending time with her; don't want her to feel neglected. She is going to be here for most of the next six weeks or so, so obviously we won't be spending ALL our time together. . . but I want to spend some time with her. This weekend was ideal: no looming deadlines at work; KC is working; J is swamped with schoolwork and couldn't hang out anyway; KH and V are out of town; and C has other stuff going on. So I'm not really sacrificing anything. . . but Mom doesn't know that. ;)

Sounds like you have some great prospects. I'm going to put in a plug for "D". :-) I never thought I'd date a man with "baggage" but I met the man I'm with now over 2 years ago through some mutual friends. Come to find out he has 2 ex-wives and a 4 year old son that he has partial custody of (every other weekend and wednesdays). I love him dearly and am so glad I didn't let arbitrary "rules" prohibit me from seeing how things go. Sound like you're of the same mindset - He might be perfect. Can't wait to hear how the drinks-date goes!