I have been very negligent about blogging of late, but I am gradually getting back to normal after a super-stressful week last week. I'd posted last Wednesday that both doggies were home and doing fine. Unfortunately, Sebastian didn't stay that way.

Sebastian began having diarrhea over the course of the evening and then vomited early Thursday morning. To make a long story short, he had to go back to the vet's on Thursday for more testing (he had labwork and a modified barium swallow), and the vet feared he might have gastrointestinal bleeding or a perforated ulcer.

I was in tears on Thursday morning, and not just because of the huge vet bill. I was genuinely afraid that Sebastian might die. He was very much not himself: he lay down on the floor of the exam room with his head on his paws while the vet was in the room simply because he was too weak and tired not to. (Usually he is pacing around or nudging the vet for petting.)

I don't mean to overdramatize, but Sebastian is my boy. If Hunter were to die, I would be sad, but I have not yet bonded with Hunter in the same way that I have with Sebastian. If Sebastian died--especially if his death were due in part to my own carelessness--I would be devastated. (Maybe one of the perils of being 38 and childless is that I've transferred all my maternal energies to my golden retriever.) So I was a wreck most of Thursday.

All's well that ends well, though. All Sebastian's tests came back normal, and though he had more diarrhea when I picked up him Thursday afternoon and continued to be not-quite-himself through Friday, he is now 100% back to normal. He's no worse for wear except that he is still on a bland diet for another week or so, taking an antibiotic to help restore his normal intestinal flora, and has a bald spot on his leg from where his IV was. Here he is tonight post-walk, with a close-up shot of his bald spot: 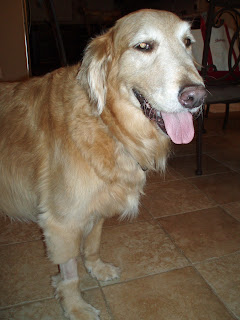 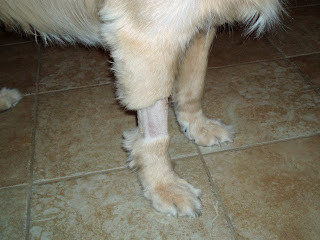 Hunter is fit as a fiddle and has been since coming home Wednesday. I could almost believe that Hunter ate no Rimadyl tablets while Sebastian ate all 25 himself. To give equal time, here are a couple of shots of Hunter from when CP was visiting: 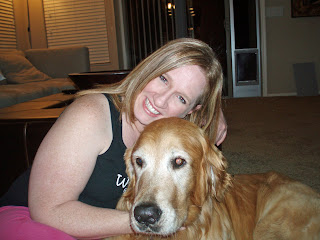 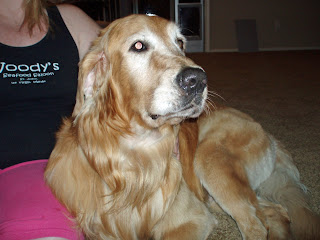 Hunter also went to his first basic obedience class with MM last Saturday while I was in Tucson visiting my CASA child M. He is the only non-puppy in the class but did very well!

Eating has been so-so. MM and I have agreed to only eat out two nights a week until the vet bills are paid off, and I haven't been eating out for lunches either, so I'm probably eating a little healthier just by virtue of eating at home. Fruits & veggies still haven't been as abundant as they should be. . . . my usual failing eating-wise.

I went to the gym tonight and felt good about it. I plan to go at least four times this week. My arm still hurts some while walking or using the elliptical trainer, but I'm dealing with it.

Oh, and about my arm: it is slightly improved but still far from 100% normal. I have an MRI scheduled for August 4th.

I had a good, focused, productive day at work today and am hoping for another one tomorrow. And that's about all that's new here.

Your poor baby! Do dogs get the flu? I lay there with my head down too.
Are you still doing your challenge? I'm still waiting for my P90X to come, we filed a complaint with eBay so we shall see what happens.

Sebastian's leg looks so funny with the shaved spot! It's way more obvious than Cora's (she got her teeth cleaned yesterday). I guess it's because Goldens are so much fluffier. Glad to hear everyone is on the mend. Good luck getting your veggies in!

Oh honey - I'm so sorry I didn't see this as soon as it was posted. My poor baby! I know how scared you were and I wish I had been there to lend a shoulder to cry on - but I'm so, so, so, so happy that he ended up fine!!!!

I hope things are looking up in Doggytown for you soon.

And I'm happy to hear you have an MRI scheduled...I hope your arm is doing better.

I am so sorry you had to go through that stress, but am glad Sebastian is on the mend. SO stressful.

Hello. I found you by doing a google search on rimadyl overdose. My babies just did the exact same thing and I feel the SAME way as you do. I am beside myself. They (well, we're suspecting it is just one) ate the pills on Wednesday of last week. One was on IV for 48 hours the other for 36. Both home for a week and then back at vet to do check up. Both are acting normal but one has high kidney and liver levels so he had to stay at the vets today. It is just awful. Please keep us updated on how they are doing... also what were they taking the Rimadyl for and what was the dose? (My lab has hip dysplasia and takes it on occasion. He took 10-15 100mg tablets)